The Menlo Park Police Department protects the city with the community’s safety in mind. Our policies and standard operating procedures demonstrated this core belief well before Campaign Zero's project - "8 Can’t Wait" campaign. The ideals expressed in “8 Can’t Wait” are thoroughly covered by the requirements in Senate Bill 230 (SB 230), which was approved by California Governor Newsom in September 2019. It mandates important use of force policies and training, including an emphasis on de-escalation and the sanctity of life. We’ve developed a series of use of force principles to improve community relations while balancing the safety of our officers and the people they serve. In regard to “8 Can’t Wait,” please review the policies below.

SB 230 requires that “an officer may only use a level of force that they reasonably believe is proportional to the seriousness of the suspected offense.” Any excessive force beyond this requirement is unreasonable.

The Menlo Park Police Department specifically prohibits “choke” or “strangle” holds; which stops or decreases the ability to breath. Currently there is federal and state legislation pending that will prohibit “choke/strangle” holds along with the carotid restraint which is authorized. The department is currently waiting for the language of any new law passed so the specific policy can be changed.

“…responding members should be aware of the following considerations and should generally:

Responding officers generally should not:

“Where feasible, the officer shall, prior to the use of force, make reasonable efforts to identify themselves as a peace officer and to warn that deadly force may be used, unless the officer has objectively reasonable grounds to believe the person is aware of those facts.” (Menlo Park Police Department Policy 300.4(b) – Deadly Force Applications)


AB 392 states: “where feasible, a peace officer shall, prior to the use of force, make reasonable efforts to identify themselves as a peace officer and to warn that deadly force may be used, unless the officer has objectively reasonable grounds to believe the person is aware of those facts.” This requirement is consistent with federal case law.

Exhaust all alternatives before shooting

“If an objectively reasonable officer would consider it safe and feasible to do so under the totality of the circumstances, officers should evaluate the use of other reasonably available resources and techniques when determining whether to use deadly force.” (Menlo Park Police Department Policy 300.4 – Deadly Force Applications)

“Any officer present and observing another officer using force that is clearly beyond that which is objectively reasonable under the circumstances shall, when in a position to do so, intercede to prevent the use of unreasonable force. An officer who observes another employee use force that exceeds the degree of force permitted by law should promptly report these observations to a supervisor.” (Menlo Park Police Department Policy 300.2.1 – Duty to Intercede)

SB 230 sets forth a “requirement that an officer intercede when present and observing another officer using force that is clearly beyond that which is necessary, as determined by an objectively reasonable officer under the circumstances.” This provision is consistent with federal law as well.

“An officer should only discharge a firearm at a moving vehicle or its occupants when the officer reasonably believes there are no other reasonable means available to avert the threat of the vehicle, or if deadly force other than the vehicle is directed at the officer or others.” (Menlo Park Police Department Policy 300.4.1 – Shooting at or from Moving Vehicles)

Require use of force continuum

“Given that no policy can realistically predict every possible situation an officer might encounter, officers are entrusted to use well-reasoned discretion in determining the appropriate use of force in each incident.” (Menlo Park Police Department Policy 300.3 – Use of Force)

“Any use of force by a member of this department shall be documented promptly, completely and accurately in an appropriate report, depending on the nature of the incident. The officer should articulate the factors perceived and why he/she believed the use of force was reasonable under the circumstances. “ (Menlo Park Police Department Policy 300.5 – Reporting the Use of Force) 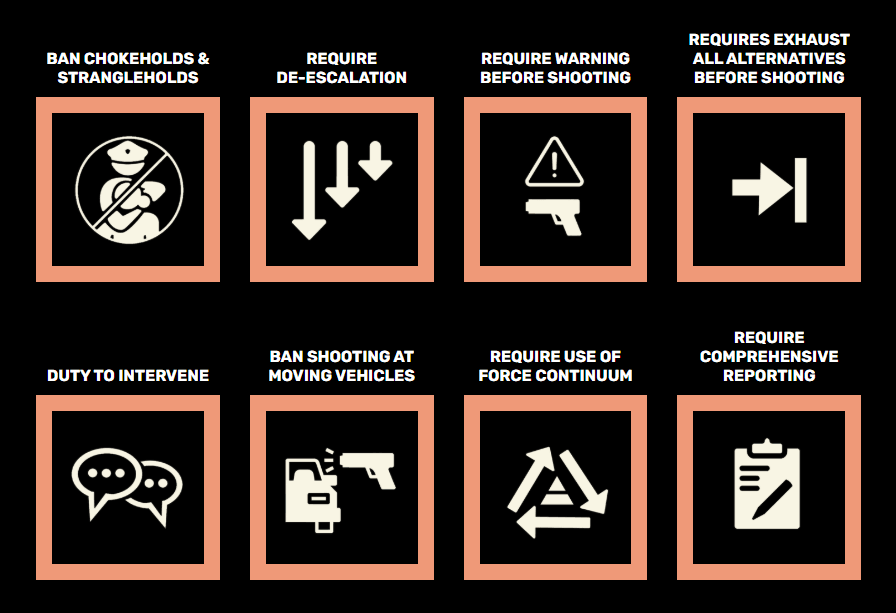