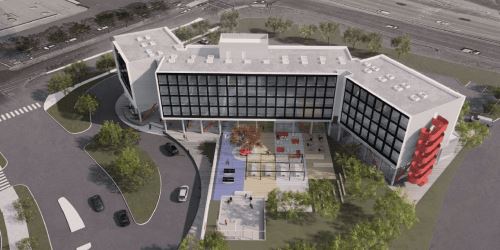 On February 25, 2019, CitizenM submitted a proposed project to construct a hotel on a portion of the Facebook West Campus. The hotel use was previously approved as part of the conditional development permit (CDP) for the Facebook Campus Expansion Project. The approximately 90,868 square foot, five-story hotel would consist of 240 hotel rooms, a restaurant, and hotel amenities. The proposed project would utilize modular construction. The proposal includes a request for a conditional development permit amendment to increase the approved number of hotel rooms from 200 to 240 rooms and decrease the number of onsite parking spaces from 245 to 120 parking spaces.

City staff is currently evaluating the project proposal and has begun the environmental analysis of the proposed modifications. It is anticipated that the following land use entitlements would be applicable to the proposed project:

On July 22, 2019, the Planning Commission held a study session to review an initial version of the proposed project. The Commission's feedback on the proposal included the following general guidance:

The applicant is evaluating the Planning Commission’s feedback on the project. The City has not received revised plans at this time.