The Police Department joined the White House’s Police Data Initiative in May 2016. The Police Data Initiative, which launched in May 2015 and includes leading law enforcement agencies, technologists and researchers, commits to improving the relationship between citizens and police. In 2014, President Obama launched the Task Force on 21st Century Policing to foster effective collaboration between law enforcement and local communities that reduces crime and increases trust.

Recently, Menlo Park and 52 other law enforcement agencies nationwide agreed to a set of concrete steps that speak to the larger shift in the culture of policing that is at the core of the Task Force’s recommendations.

On June 1, 2016, the Police Department launched its first three data sets that included calls for service, traffic stops and personnel demographic information including sex, race and education level. The department has since released more data sets via the City’s open data portal. 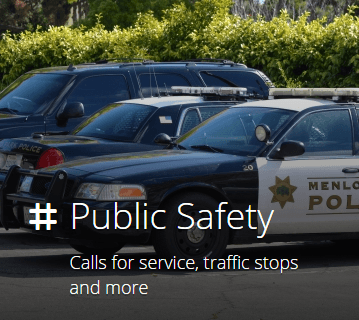